Skyfire Up And At 'Em for iPhone & Androids, But You'd Better Wait for the iPad Version

Don't Miss The Free Book Alert Featuring
Out of Water, 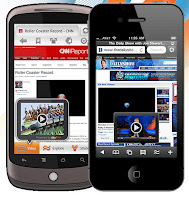 If you're waiting for the Skyfire mobile browser to release its app  for playing Flash video on your iPad, keep waiting, advises Skyfire chief exec Jeff Glueck in a blog post.
Skyfire optimized for the iPad will include "a host of extra features," the company says.
Skyfire for the iPhone released on Nov. 3, for $2.99. Demand overwhelmed the company's servers to the point they declared “sold out” and locked the virtual door to get it together. Though Skyfire is now available for the iPhone, the iPad version won't be available until later this year.
PC Magazine goes into greater detail on the app, but here's what Skyfire's Glueck said:

The Skyfire team has been hard at work expanding the service given the popularity of Skyfire for iPhone and iPod Touch.   The team here was gratified to have reached the Top Grossing and Top Selling spots on the App Store, as well as #1 selling in the Utilities category.
On November 5th we announced Skyfire for iPhone would be available in “limited batches.”  I’m glad to report that we have been able to add a large number of users since then smoothly, with no limitations, and uninterrupted service.  We expect now to keep the App up in the App Store in the US without pause.  Last week we added availability in Canada.  UK and Ireland are up next and will go live soon.  We plan to roll out additional countries after that.  Follow us on twitter or Facebook for updates.
A number of you have asked about an iPad version of Skyfire, and we are working on an iPad-optimized version.   No dates to promise yet, but we hope to have news before the end of this year.  If your primary device is the iPad, we suggest you hold off and wait for Skyfire’s iPad app.  It will have a host of extra features, as well.
Later this week we have some big product news for our Android users.  It’s under wraps for a few more days, but those of you who love social networking and browsing both can expect to like this.  Skyfire pioneered web browsing with a dedicated cloud service and we want to take things to the next level.  Stay tuned.
Posted by Tom Dulaney at 1:08 PM