Part 3: A Day In The Life of A New Thriller, Rogue Wave & It's Author, Boyd Morrison: Release Day of Rogue Wave


By Tom Dulaney, Editor
The official end of Rogue Wave's “release day” begins its long crawl across America. On the East Coast, Planet iPad assesses the day at 10 PM, while on the West Coast it's only 7 PM and the release party is just starting.
Boyd Morrison, author of Rogue Wave, knew from experience with previously-released The Ark that today would be a bit of a non-event is many ways. Much like a man's 40th birthday, Boyd said. Just like any other day.
The rankings on Amazon.com for the paperback book and ebook rose and fell, giving the impression of action. At the moment, Rogue Wave sits at No. 2,541 as an ebook and 25,764 as a paperback.  Those are very good numbers if you consider where the best-known authors' big bestsellers rank today.
But because they move, and move quickly, those numbers can trick us, making us think they mean more than the do. The real proof of a novel's success is not how high it sits on a bestseller list today, but on how many readers are moved to buy the book over time. That may take days, or weeks, or months to play out.
“I plan to make this my career,” Boyd said today. He expects to write many books before, with good fortune, he is as well known as the premier authors of thrillers. “Persistence,” he explained when describing part of the reason he has made it to this day.  He is clearly not done persisting.
Ken Follett, author of Pillars Of The Earth, World Without End and--among a raft of others--his first major hit, Eye of the Needle, speaks of the same long-term progression toward great success as an author. His fabled Pillars Of The Earth barely generated a ripple when released initially. Yet, over time, its popularity grew. He's called it his most successful novel, the one he wrote against the advice of all his colleagues in the publishing industry. They thought it was too far afield from his spy thriller genre.
Time proved them wrong.
Boyd's life has changed since his dream of having a big name publisher sign him to a contract. “It's a job and you have to treat it as a job,” he said earlier today, explaining the duties of meeting a publisher's schedule, of making sure his work is on time so the artists can do their work, and the marketing department can pull a campaign together, and printers can print and shippers can move the paperbacks around the nation to make release day in every bookstore.
That's quite a change from the free and easy days of the self-published eBook author selling only digital editions in the Kindle Store. Nothing wrong and a great deal right with the eBook format, he indicates.  It it weren't for eBooks and Amazon and the Digital Text Platform, Boyd says, he would still be an unknown writer.
And perhaps it is just a legacy of the “old days” of publishing, but he says “seeing your book on a shelf in a book store” is an event with impact on the author that the ebook world doesn't offer.
Earlier in the day, Boyd expressed mystification at Amazon's classification of his book as a “manga mystery” and even that it had gotten onto the top of the Amazon bestseller lists in the comic book subcategory of war, and the general fiction genre of war stories. It is not a spoiler to tell you that Rogue Wave is not a comic book, a manga mystery, or a war story. The digital world gets it fast, it seems, but not always right.  It's a thriller and a technothriller.  Boyd's scientific background as a Ph. D. engineer who's worked for NASA, Thomson/RCA and Microsoft shines through.
But that's OK, because eBooks are really in their infancy and the systems that serve them are infants as well. With eBooks roaring ahead at triple-digit growth rates, they are still only 4% of the total book market for 2010, according to best estimates from expert companies like Forrester Research. Everyone knows they are coming on fast. Even Stephen King speculates that in a few years eBooks will account for 50% of all book sales each year. But, King adds, “maybe.”
Things are changing, and changing fast in publishing. Yet with 96% of all books sold this year being printed on paper, there is still the stability of traditional ways and methods to provide a heavy keel to keep this runaway ship of publishing from capsizing in this tumultuous world.

The highlights of Boyd's release day are not big numbers and the acclaim of total strangers buying his books or tacking reviews onto his book's page. Instead, they were these:
The arrival of a bouquet of flowers sent by his wife's parents. Attached was a card reading: “I'm so glad it's you.”
On the phone, he explained the special meaning of that, dating back nearly 20 years to the day he and Randi announced their engagement. His new-found mother in law to be hugged him and whispered: “I'm so glad it's you” who will wed our daughter. Rogue Wave's dedication page reads: “To Frank and Arden. I'm so glad it's you.” 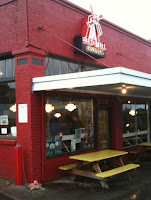 And this: “Treated myself to a burger at my favorite burger joint, Red Mill. Best bacon cheeseburgers in Seattle!” he wrote in a text to Planet iPad with a photo attached. Not quite New York high society dining, but now you know where to go in Seattle.
And this: “I called a couple of local indie booksellers to see if I could drop in and sign stock, but they haven't received their shipments yet,” the texted on the run. “That's why Release Day can be anticlimactic.”
And this: “Took an hour to work at at the gym. Spent my StairMaster time reading a soon-to-be-published thriller for a possible endorsement. Enjoying it so far.”
And this: “Signed Rogue Wave stock at one Barnes and Noble, but couldn't at the other B&N near my house because they were already sold out!”
And even this: “Picked up five boxes of desserts for the party tonight.”
And this to close the day:   Boyd and his wife are surrounded by friends as these words are written, people who believed in him and them before his breakthrough with famed Simon & Schuster.  No matter how things go, it seems, that same crew will be there believing in them in the future.
Posted by Tom Dulaney at 11:37 PM