CFO Magazine Admits It Didn't See iPad Coming As Business Tool; But Neither Did Steve Jobs 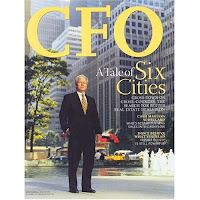 CFO, the magazine read by over 450,000 chief financial officers, demonstrates that iPads are becoming a big hit for business use by running two articles on the subject today.
"Tablets Get Down To Business," by reporter David McCann noted a survey showing 26% of mobile enterprise workers plan to buy an iPad in the next six months. “That they [iPads] will be used for work is beyond question,” he said. Six months earlier, CFO allowed that somebody might possibly—maybe--dream up an on-the-job use for iPad, but it was seen more as a consumer toy.
In his second story, "Attack of the Apps," McCann makes the point that people used to the mantra “there's an app for that” on the home and leisure fronts are chafing for the same thing on the job.
In any case, companies have issues with plugging iPads and their apps into the corporate IT infrastructure.  That's the primary reason, other than budgets, that the advanced computer programs an average person uses at home take years to make it through the company's front door. The typical employee or exec goes back a year or two in time, at least, in tech sophistication terms, when they commute to work.
CFO's online page complements the printed magazine, read by some 450,000 chief financial officers around the world. Only the print version is available at this time from Amazon.
With changes announced at Amazon last week that Kindle Store magazines and newspapers will soon be readable on iPad and other connected devices, CFO with its detailed charts, graphs and scrumptious photography of men and women in power suits is a likely candidate for change.
Posted by Tom Dulaney at 10:23 AM