Flash for iPad Coming? Not Quite Yet From Overloaded Skyfire 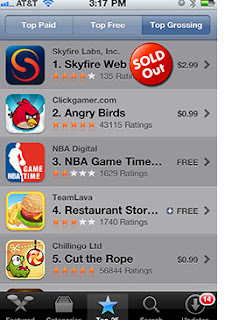 CNNMoney.com headlined it this way: “Flash Coming To iPhone and iPad – Really.”
They said early last week that the Skyfire app would begin selling for $2.99 on Thursday (Nov. 4).  But as of the morning of Nov. 7 there remained no mention of an iPad-running app on Skyfire's main web page
The company did launch Skyfire for the iPhone, but quickly had to shut off sales because of overwhelming demand clogging its servers.
But on Sunday morning, it appeared Skyfire was up and running in the Apple Store—for the iPhone.
The lack of Flash for the iPad has been a sore spot for users and a talking point--make that "laughing point" for critics of the iPad.  A demo for the app on the iPhone sure looks makes it look like something that would present quite nicely on the iPad.
Here's the announcement about that sales shutdown by Skyfire:
Skyfire for iPhone has been received with unbelievable enthusiasm. Despite our best attempts and predictions, the demand far exceeds our initial projections.
The user experience was performing well for the first few hours, but as the surge continued, the peak load on our servers and bandwidth caused the video experience to degrade.
Thus we are effectively ‘sold out’ and will temporarily not accept new purchases from the App Store.  We are working really hard to increase capacity and will be accepting new purchases from the App Store as soon as we can support it.
We are very grateful for the demand. Within 5 hours, Skyfire for iPhone became the top grossing app, the third highest paid app overall and the top application in the Utilities category. Wow!
Please bear with us as we bring our capacity in line with the incredible demand – stay tuned.
Posted by Tom Dulaney at 10:00 AM