Molly Murphy, a most unusual private investigator from the Edwardian period, handled her first case long before she migrated to New York City and gained renown as a sleuth.  Free today, along with 240+ other fine reads, is The Amersham Rubies.....

But first, a word from ... Today's Sponsor
For fans of Gothic Romance, meet Safire, who tries to hide her psychic abilities to avoid being burned at the stake.  But when the soul of a haunted man hangs in the balance, she has to risk all to save him.

"The characters are full-bodied, the dialogue is terse and irreverent, the action is exciting and clever - and the book, all 414 pages of it, never has a boring moment." --Rapid River Arts & Culture Magazine


"Love at first sight, frightening battles, court intrigue and vengeful spirits abound in The Witch Awakening . . . This book is a wonderful read. I found it hard to put down." --Cgrotpeter from NightOwlReviews.com


The odor of burning flesh and the screams of those condemned to the flames disturb the dreams of young Safire of Long Marsh.


Safire struggles to keep the curse of her psychic abilities secret, lest she be burned at the stake as a witch in her native land Cormalen. Forced to keep her talents hidden instead of learning how to use them, Safire is ill-prepared to face the evil that awaits her.


When she meets the rebellious Merius of Landers, a nobleman determined to escape his overbearing father's influence, she finally finds someone who accepts her. But their romance interferes with court plots and family duty and ultimately leads Safire to confront the dark secrets of the House of Landers alone.


What she finds there proves to be a test of her unusual gifts, a test that could free the soul of a haunted man--or end in her death.


A Brief Excerpt From Chapter 20 of Witch Awakening--
. . . I grabbed the back of a chair to steady myself, but the chair began to jerk about violently, drumming against the floorboards.


Instantly, Safire was up and across the chamber. She rested her hand on my arm, her touch cool. "Shh, it's all right."


I snatched my arm from her grasp. "How dare you touch me?"


She grabbed my other arm with both hands.


"Damn witch!" I swore and raised my palm to slap her away, but then I froze, my hand in midair. A strange sensation was running up my arm from her hands, a tingling warmth that moved through the veins to my heart and then to the rest of my body. All my muscles loosened, as if I'd just had several shots of the best whiskey, and the shaking stopped.


"Shh. It's all right." She looked up at me, her grip on my arm slackening. Her eyes were clear and bright as green glass, her voice low and soothing. I found myself staring down at her as if in a trance. What sort of pact had Merius made with the devil for this creature?


"You've cursed me," I said flatly, though the words seemed to be another's, not mine . 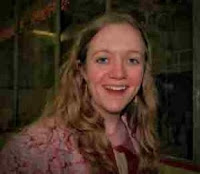 As a child, Karen suffered frequent bouts of insomnia. The only way she could settle into sleep many nights was to imagine stories that played out like movies on the dark ceiling over her bed. Since her mean parents refused to replace the TV after the cat blew it up by peeing on the cord, all Karen had left to entertain herself in the lone wilds of the Minnesota wilderness were books and her own stories.
As Karen grew, the stories grew with her. One day when she was fourteen, she told her mother one of these stories for probably the hundredth time. Her mother, who knew Karen very well, turned to her and said, “You know, Karen, you keep talking about these stories, but you never write them down. You keep saying you’re going to write a novel, but I don’t believe that you will.”
This comment infuriated Karen so much that she started writing her stories down and hasn’t stopped since.
Awards, etc.
Tied for Second Place in the Fort Bend Writers’ Guild 2008 Novel Contest
Won Fifth Place in the Writing Show 2008 First Chapter Contest
Editor, Counterpoint Literary Magazine, 2000-2001
Click Here To Visit The Amazon Author's Page
Click here

to download The Witch Awakening  (or a free sample) to your Kindle, iPad, iPhone, iPod Touch, BlackBerry, Android-compatible, PC or Mac and start reading within 60 seconds!
UK Kindle customers: Click here to buy or sample The Witch Awakening


Each day's list is sponsored by one paid title. We encourage you to support our sponsors and thank you for considering them.
Authors, Publishers, iPad Accessory Manufacturers:
Interested in learning more about sponsorship? Just click on this link for more information.
Free Contemporary Titles in the Kindle Store

HOW TO USE OUR NEW FREE BOOK TOOL:
Just use the slider at right of your screen below to scroll through a complete, updated list of free contemporary Kindle titles, and click on an icon like this one (at right) to read a free sample right here in your browser! Titles are sorted in reverse
chronological order so you can easily see new freebies!
Posted by Tom Dulaney at 5:26 PM