After A Shocking Accident, Cahill Can See Unspeakable Evil In A Netherworld. Seeing It, He Is Forced To Fight It Or Die. Read A Free Sample Of Our eBook Of The Day, The Dead Man: Face Of Evil, Without Leaving Your Browser!

Matthew Cahill is an ordinary man leading a simple life...until a shocking accident changes everything. Now he can see a nightmarish netherworld of unspeakable evil and horrific violence that nobody else does.
For Cahill, each day is a journey into a dark world he knows nothing about...a quest for the answers to who he is and what he has become...and a fight to save us, and his soul, from the clutches of pure evil.
This book includes bonus excerpts of THE WALK by Lee Goldberg and DESERT PLACES by Blake Crouch.

The story races by at a brisk rate of knots, each twist and turn, and shift in time providing another revelation [...] I was enjoying it so much, I didn't want it to end. --Permission to Kill Blog

THE DEAD MAN: FACE OF EVIL is a tight, well written, supernatural thriller [that] satisfies all on it's own, while being a terrific opener that promises an epic tale to come. I'm excited for the next book. --Man Eating Bookworm Blog

I'm hopeful they continue with this character since it's set up so well. I've not seen a writing tandem like this since the glory days of Richard Sapir and Warren Murphy --Bookgasm 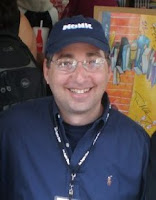 
His TV work has earned him two Edgar Award nominations from the Mystery Writers of America.


His two careers, novelist and TV writer, merged when he began writing the Diagnosis Murder series of original novels, based on the hit CBS TV mystery that he also wrote and produced. And he also writes novels based on Monk, another show he's worked on.


His subsequent books include the non-fiction books Successful Television Writing and Unsold Television Pilots as well as the novels My Gun Has Bullets , Beyond the Beyond , and The Man With The Iron-On Badge.
William Rabkin is writer for the TV show Psych and the author of the novel Psych: A Mind is a Terrible Thing to Read and the forthcoming Psych: Mind Over Magic.
To warm up for the Psych novels, he wrote and/or produced some 300 hours of dramatic television. The first short film he directed, Voices Carry starring Melora Hardin, played at the Palm Springs International Short Film Festival.  William is an assistant professor  of creative writing in UC Riverside-Palm Desert’s low-residency MFA program.

And here, in the comfort of your own browser, is your free sample: