April 11, 2011 -  Every teenage girl has secrets, but Melody Carlson pierces the thin veil between those secrets and grief, guilt, faith, and forgiveness in one of the 7 the latest additions to our 250+ Free Book Alert listings….
But first, a word from ... Today's Sponsor
A noir mystery set in the 1970s:  After serving 29 years in prison for murder, Al Roberts at last protests his innocence.  Jimmy O'Brien, LA lawyer to the scum of the city, wants to know why.  O'Brien starts digging, and that's a threat to the underground aristocracy of Los Angeles, the city of broken dreams.

Detour to Murder
(The Jimmy O'Brien Mystery Series)
By Jeff Sherratt
5.0 Stars - 7 Reviews
Kindle Price: $2.51
Text-to-Speech: Enabled
Lending: Enabled
Here's the set-up:
In 1945, the semi-nude body of a woman is found in a two-bit Hollywood motel, a telephone cord wrapped around her throat; face frozen in a grimace of horror. The stolen car of a murdered motorist is parked in the motel parking lot, the owner lying broken and dead on the side of an Arizona highway.
Al Roberts confesses and has spent the last 29 years in prison. Now, nearly three decades after meekly confessing, the aged Roberts swears his innocence. Jimmy O'Brien, defense attorney to the dregs of the criminal world, must find out why.
Why did Roberts give a false confession? And why has he waited 29 years to tell the truth?
O'Brien digs into the past, igniting a powder-keg that threatens to expose the long-held secrets behind Detour, the iconic Hollywood film documenting Roberts' story. Secrets that could destroy the underground aristocracy that has held power in Los Angeles, city of broken dreams, for years.
Jimmy's ordeal takes him from the bleakness of Roberts' prison cell to the seedy streets of Hollywood, frantically searching to find out who took this DETOUR TO MURDER.
From the Reviewers:

DETOUR TO MURDER is smoothly written and incredibly intriguing. I'm hooked on the Jimmy O'Brien series, and fell deeper in love with his cast of characters, particularly Rita and Sol. The feel of the time period is authentic, beautifully rooted. The story has enough twists and turns to keep you up at night, and Sherratt's talent weaving the tangled web is superb.
If you like noir mystery, or if you don't know if you like noir mystery, you must read Detour to Murder, by Jeff Sherratt. Heck, if you just like mysteries, read this book.
Newport Beach author Jeff Sherratt brings his cop-turned-lawyer hero Jimmy O Brien back for a third adventure in this noir set in Southern California in the 1970s.   Sherratt does a great job with snappy comedic dialog and evocative descriptions of the Southland from the gritty streets of Downey to Chino, Los Feliz, Hollywood and the coast north of Santa Barbara. The story involves stolen identity, political corruption and tragic romance, as well as murder. What more can a reader ask? --OC Metro
About the Author: 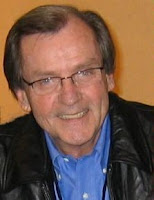 Jeff Sherratt is the author of the acclaimed Jimmy O'Brien mystery series. His newest book, DETOUR TO MURDER (2010), is published by ZOVA Books and is the first in the Jimmy O'Brien film noir mystery series.
Jimmy O'Brien's latest exploits are chronicled in THE MIDNIGHT MADONNA, released 0n February 20, 2010. The novel had been previously published as an exclusive ebook under the title, Expectation of Murder.
Soon after its release, his first novel, THE BRIMSTONE MURDERS (2008) became the bestselling book of all time For Echelon Press. The second, GUILTY OR ELSE (2009) was nominated for the Left Coast Crime Panik Award.


Jeff has written nonfiction articles for corporate newsletters and his short stores have been published in H2O Magazine and the anthology, THE HEAT OF THE MOMENT. He is a past board member of Sisters in Crime/LA, and currently a member of Mystery Writers of America.
Jeff has been a speaker at many book events including libraries, various California prisons, and he was the guest speaker at the prestigious Southern California Writers Conference.
He is currently working on his fourth Jimmy O'Brien novel, CYANIDE PERFUME. Jeff lives in Newport Beach, California with his wife, Judy.
Click Here To Visit The Amazon Author's Page
Click here

to download Detour to Murder  (or a free sample) to your Kindle, iPad, iPhone, iPod Touch, BlackBerry, Android-compatible, PC or Mac and start reading within 60 seconds!
UK Kindle customers: Click here to buy or sample Detour to Murder
Each day's list is sponsored by one paid title. We encourage you to support our sponsors and thank you for considering them.
Authors, Publishers, iPad Accessory Manufacturers:
Interested in learning more about sponsorship? Just click on this link for more information.
Free Contemporary Titles in the Kindle Store

HOW TO USE OUR NEW FREE BOOK TOOL:
Just use the slider at right of your screen below to scroll through a complete, updated list of free contemporary Kindle titles, and click on an icon like this one (at right) to read a free sample right here in your browser! Titles are sorted in reverse
chronological order so you can easily see new freebies!
Posted by Tom Dulaney at 5:36 PM