There are some interesting numbers floating around about the iPad and its iBooks Store, and some of them seem to merit a closer look.
First, congratulations to Apple and Steve Jobs for an impressive rollout of a pretty cool device, and for being reasonably straightforward with the public in sharing some numbers. Given how close Amazon plays such numbers to the vest, covering the Kindle is a bit like navigating through heavy fog by comparison.
Jobs appeared at an iPhone event on Apple's Cupertino campus yesterday and led off with a bit of an iPad progress report, as reported in a New York Times blog and elsewhere.
Jobs said that there were 300,000 iPads sold "on the first day," and that the cumulative total as of today's even was 450,000. This is impressive, but it makes me wonder:
Don't get me wrong: 450,000 iPads sold to date at the various iPad price points means over $250 million at retail, which, as I said, is impressive. The online Apple Store shows a slight shipping delay right now, and Jobs said today that "we're not making enough right now" and that he "heard Best Buy was sold out." And Apple has yet to reveal anything about the number of iPad 3G pre-orders fir late April shipment, which could conceivably double the volume of wifi iPad orders.
At the same time, when we become so accustomed to expecting magical things from Apple (and it's been Apple's choice to use the word a fair amount lately), something like the actual sales figures can seem a little underwhelming.
After waiting over the course of the last year or two for the launch of the iTablet or the iSlate or the iPad, one naturally expected there to be some pent-up demand, and there was. But that iPad Fever seems to have been roughly equivalent to the pent-up demand that led Amazon, on its February 23, 2009 release date for the Kindle 2, to ship roughly a quarter of a million units after several months of waiting.
250,000 units in a day, 300,000 units in a day, those are great days for a new product. But Apple has shipped 50 million iPhones and another 35 million iPod Touches, so one is almost inclined to say "ho-hum" at launch-day sales in the low six figures.
There were other numbers from Steve Jobs today, specifically about ebook sales.
He said that there had been 250,000 ebook downloads from the iBooks Store within the first 24 hours, and 600,000 ebook downloads in all so far (which means about 90,000 per day after the first 24 hours). He didn't say how many iPad owners had downloaded the free iBooks app, so it's impossible to suss out the relative numbers of iBooks visitors and Kindle for iPad visitors, or how many books the average visitor is buying and downloading.
250,000 downloads in a day seems impressive, doesn't it? But for those publishing industry observers who see salvation when they see Steve Jobs, it may be worth noting by comparison that as early as October 2008, when the Kindle's installed base was not much larger than the iPad's installed base is today, there were a handful of Kindle Store authors who were experiencing daily Kindle Store sales of over a thousand copies per individual title. Cumulatively, over the 28-month life of the Kindle, it is very likely there have been over 300 million ebooks downloaded from the Kindle Store. This estimate, of course, includes Kindle books downloaded to a growing range of Kindle-compatible devices that now includes the iPad.
One interesting if minor disconnect, at present, is in the two listings of bestselling "free apps" for books that one finds in the two iterations of Apple's App Store that appear, respectively, on the iPad itself and in the iTunes Store's App department that comes up on a computer:
Some of this disparity would seem to be about the fact that the Kindle app is also an iPhone app, and the underlying fact that there are nearly 200 times as many iPhones and iPod Touches that can run it as the number of iPads that can run the iBooks app. But it does seem as if there may be some effort on Apple's part -- perhaps inadvertent? maybe they forgot there was something called the Kindle? -- to tilt the playing field when one initiates a search for iPad-compatible books apps in the iTunes Store's App department and finds dozens of apps listed, but no Kindle for iPad app: 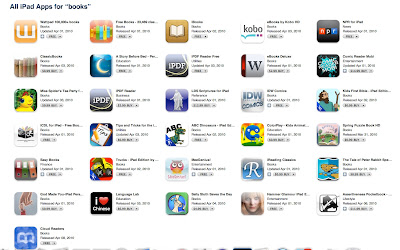 Naturally, with a catalog that is less than 10 percent of the Kindle Store's catalog after adjusting each store's list to omit free public domain titles, it will take the iBooks Store a while to compete seriously with the Kindle catalog regardless of the liberties that may be taken with home field advantage. But it does seem clear that, with each iPad sold, the future looks brighter and brighter for both Apple and Amazon.
Posted by Steve at 8:40 AM