iPad Nation Daily Free Books Alert for Thursday, April 22: A High-Quality Audiobooks App and Thousands of Free Books Read Aloud to You on Your iPad, iPhone, and iPod Touch 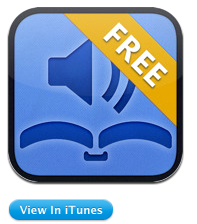 When it comes to having books read aloud to you on your iPad, iPhone, or iPod Touch, did you think you were stuck with having to choose between (a) the rather robotic (if often convenient) intonations of Apple's free VoiceOver app and (b) the generally high costs of the professionally read audiobooks available from the iTunes and Audible.com stores?
It turns out that there are some other great choices. One of my favorites is a remarkably inexpensive app called Audiobooks that's available for just 99 cents in the App Store for your iPad,  and free for your iPhone or iPod Touch.

The Audiobooks apps read aloud to you, in what I have found to be professional quality presentations, from over 3,200 classic audiobooks that have been made available by volunteers through LibriVox project.

Whether you download Audiobooks for free under iPhone Apps or pay 99 cents for the iPad version, it will probably take you just a few moments of listening before you decide that you've gotten a great value. The downloads I have browsed so far are full-text unabridged versions, read with care by talented humans, and Audiobook's user-friendly features include the things that I am looking for in such an app, such as:

The screenshots at the right are from the iPhone/iPod Touch app, but they give you a sense of the browsing, searching and listening features available through Audiobooks. I think you'll find the Audiobooks range pretty amazing, with offerings in English, Spanish, Chinese, Japanese, French, German, Italian, Portuguese and over a dozen other languages. The catalog if pretty stunning too, with hundreds of great authors.

I've been told by Lauren Smith, at Audiobooks app creator Cross Forward Consulting, that over 1.2 million people have used the Audiobooks application on the iPhone or iPod Touch during the past year, and that "the company is also working currently on a major update that will include in-app purchase for several hundred additional "professional" titles, which are read by professional narrators and feature authors like Jodi Picault (House Rules) and Cressida Cowell (How to Train Your Dragon)."

Don't get me wrong: I've listened to books on Audible.com and iTunes Audiobooks, and even experimented with Apple's VoiceOver and the Kindle's Text-to-Speech.  But it's pretty tough to beat the combination of quality and price offered by the Audiobooks app that's available in the App Store.

Please feel free to add comments below to share your experiences with Audiobooks and other book listenings.
Posted by Steve at 4:09 PM