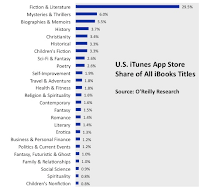 If you are wondering exactly what's for sale in the iBooks Store that serves as Apple's home-field entry into the highly competitive arena of retail ebook apps for the iPad (and soon, we guess, for the iPhone and the iPod Touch), you may be interested in Ben Lorica's research post at his O'Reilly Radar blog, noted here via Teleread.

Among the interesting tidbits reported by Ben in his study of the "the over 46,000 (paid and free) books available through the iBooks app:"

One thing that surprised me about the post was the 46,000 figure. It had been widely reported that there were 60,000 titles available in the iBooks Store at launch, so I left this comment on Ben's post seeking clarification, and if I hear back I will post an update here:

Terrific work, Ben. I'm surprised that the aggregate figure is 46,000, since we were all hearing 60,000 as of the 4/3 release date and would have expected some growth since then. Is there any chance that the 46,000 figure covers titles for which there has been an actual sale, or am I barking up the wrong apple tree? I'm naturally resistant to the notion that Apple would have padded the numbers!